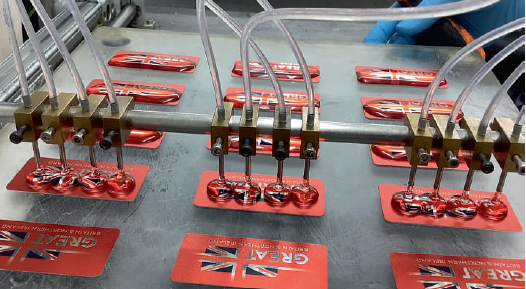 This June, thousands of marketing decision makers gather at Cannes to celebrate creativity. Encompassing five days of networking, awards and events, Cannes is a go to for marketers and advertising executives from across the globe. When the BPMA discovered the Advertising Association and the Department of International Trade had decided not to consider merchandise for their high profile trade mission, they set about preparing suitable merchandise and select giveaways be used before and during the event.

Focusing on British made goods with story behind them for the Department of International Trade packs, the trade delegation received casebound Como notebooks from Juniper, Mood soft feel pens from Pen Warehouse and natural 5oz cotton shopper bags from Direct Trade Bags bearing the ‘Great’ campaign logo. To complement the message at Cannes, WCM+A created metal badges with a domed finish and midocean provided branded fans to ward off the summer heat on the waterfront, to be handed to Cannes Lions festival attendees. Equipped with additional pens from Senator for the trip, British members were well represented in production and product stories.

The Advertising Association were delighted with the goods, admitting the challenge they found with securing British, sustainable and recyclable goods had seemed daunting. Impressed with turnaround and quality, they were fully behind the British based businesses who supported the programme. Rewarded with an extra surprise, gin and tonic flavoured lip balms from Bio Labs, eyes have been opened to the potential of merchandise in the communication mix. The event has provided a perfect platform to promote the materials, products and range of options available.

Attending a trade delegation event prior to Cannes, BPMA CEO Carey Trevill was invited to tell the British production story behind the stunning products they had received and describe the vibrant, entrepreneurial approach to providing innovation and inspiration. With a chance to also remind the trade delegation about the impact of the end of Transition on core business, the Department of International Trade listened with interest to how day to day business was conducted.

As part of the approach, the BPMA will be teaming up to cover more PR and extended stories to talk about the involvement in this trade mission and the critical place of merchandise in the marketing mix to convey important brand messages into the hands of decision makers.

The constant contact with Government teams is part of the ongoing work behind the scenes the BPMA undertakes weekly and daily, responding to requests for information and helping further the profile of our industry. With further meetings with the Minister for Exports in July, look out for further reports in the next issue.