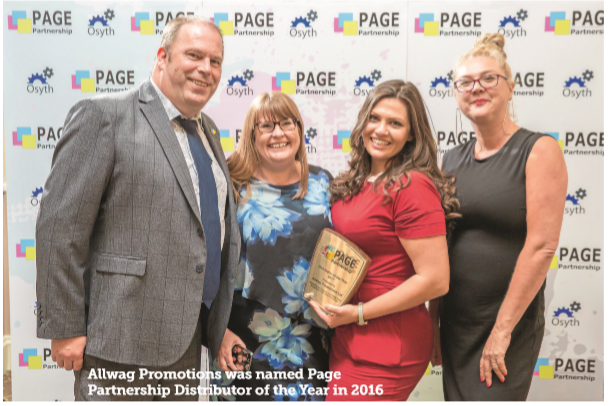 The Vision for the future

The BPMA’s new chairman, Angela Wagstaff, has the sort of entrepreneurial spirit that’s common in the merchandise industry. The business she helped start with her husband Alan turns 20 years old next year, which is something of a belated victory for the couple. “Alan had been made redundant three times in the print industry and people were saying there was no future in merchandise,” she says. “We thought they were wrong and started the business to prove a point. It was the classic start-up from the back of the garage.” It’s the sort of no-nonsense approach that people who know Angela will be familiar with.

The Essex businesswoman describes herself as passionate, committed and prepared to get involved, all characteristics that will stand her in good stead for her new role chairing the BPMA. She took over the position in November from outgoing chairman, and now president, Graeme Smith, having spent the past two years as vice-chair. She talks passionately about the challenges ahead for the industry.“There are some things that we can’t affect and we just have to get on with, but there are so many other great opportunities where our destiny is more in our own hands.”
Education first Angela rattles off a list of objectives from her to do list as she prepares to hit the ground running. First up is education. “Education is high on the agenda forme. We need a career path with apprenticeship playing a bigger role and that are aligned through the marketing sector to universities.

A lot of us fall into this business, but I want it to be a career of choice for those coming through.” A career in merchandise is one rich with variety, she says. There are a lot of areas that people need to understand, from compliance and legal issues to creativity and environmental impacts which is what makes it so exciting and challenging. Ironically, Angela herself is one of the generations of founders who did ‘fall into the business, and built her way up. She started the company with her husband initially to provide sports merchandise as Alan was involved with lots of sports clubs.

“We thought we’d give it a go and after the first year we saw there was an appetite,” she says. With a background in recruitment, training, sales and marketing, Angela had been working as a business consultant, so she started to apply some of the skills she had successfully applied to other businesses to Allwag Promotions, working through where they wanted it to go and how to get there. “We saw offering a personal and trusted service as really important,” she says. “We love speaking to and meeting people to find out what marketing problems they are facing to allow us to create solutions, rather than just taking orders. It just continued to grow from there.”

Associated benefits From the start, she saw the importance of trade association membership and Allwag Promotions joined the BPMA as soon as it could. “With my background in business consultancy, Isaw the value of being aligned with a trade association and of networking with others in the industry.” She was invited to stand for election to the board about six years ago. “I had ‘words’ with Gordon andhesaidthatasI had such strong opinions and was willing to offer support, I should join,” she laughs. Change has come about during that time, transforming an organisation she describes as “a lot of men in grey suits and that was considered a bit of a closed shop.” By contrast, today’s board is the strongest it has ever been, she says. “We have just appointed three fabulous new directors who have passion, professionalism and enthusiasm. It’s great to see so much momentum forming from within the industry.”

A stronger BPMA The experience of certain distributors going into administration has also underlined the need for change and has galvanised the industry to get them talking about the issues that are important. It has also got businesses sharing their experiences and talking about the role the BPMA can play and why it is important, she believes.“More members are returning, which is fabulous.” Angela is positive on the appointment of Jon Birrell as the new CEO, has been part of the team that appointed him. “I’m really excited that he’s involved. He’s very considered and member-focused and it’s a really exciting time for the BPMA.”

As well as driving home the importance of education, Angela has her focus on several other areas. One of which shows the industry can help clients to deal with branded merchandise that becomes surplus to requirements, such as when a business brand. With more companies concerned about sustainability, there is an opportunity to provide a solution that recycles, or re-uses this merchandise. The BPMA is working with several charities at the moment to see if there are ways of rebranding by covering up or removing branding. “The BPMA wants a united solution. Trade waste is a challenge but there could be a positive story here as we can not only benefit members but also charities.

The next generation Another area she sees as important is involving more of the younger staff in the industry. “We’re a bit set in our ways and we need to understand from our future leaders, where the industry should be heading,” she adds. “Buying patterns have changed and the industry can be a bit old-fashioned. I listen to my daughters for advice. ” Through the Academy, the BPMA wants to develop a mentor scheme to harness young people’s enthusiasm enabling them to learn from those who have a wealth of experience. A youth focus group is planned to help the BPMA understand the impact of digital on buying habits, particularly among Millennials.

Allwag itself has a line on mentorship, through involvement with Kids Inspire, a Chelmsford charity that works with disadvantaged youngsters trying to help them get a better start in life. Seven of the Allwag team are training as mentors. It is an approach which could sum up Angela’s new role at theBPMA. “Giving something back is really important and it gives a great sense of satisfaction,” she says.