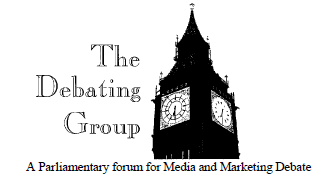 On Monday 9th November, the BPMA took part in its first debate as a sponsor of the Debating Group, partnered with the IPIA, the Independent Print Industries Association. The debate, ‘digital communication is more important than ever in building brands’ was hosted by the BPMA virtually on behalf of the Debating Group was and attended by over 70 marketing professionals and BPMA members.

The debate, usually staged in the House of Commons in one of their debating chambers, was conducted virtually for the first time in the Debating Group’s history. The debate was chaired by MP Dean Russell who provided an update at the start of the event on the Government’s response to the pandemic, the recent vaccine news released and how Government values creative industries, relating back to his own experience in marketing.

The IAB (Internet Advertising Bureau) and DMA (Data & Marketing Association), proposed the motion, represented by Monica Manoras, Head of Account Sales at Twitter and Mark Cripps, a member of the DMA Board and former Chief Marketing Officer of The Economist. Opposing the motion, IPIA representative Mike Hughes, Managing Director at Latcham Direct, partnered with the BPMA’s CEO, Carey Trevill.

Both proposing and opposing sides were given strict timings to deliver considered arguments on why digital communication was the way forward. The IAB and DMA provided excellent insight and case studies to illustrate their side of the debate, impressing those gathered with new facts about our engagement with digital channels. Building a clear argument on the merits of connection and trusted mediums, the IPIA and BPMA successfully put their points across to the debate audience, winning the debate on the night. A first for both BPMA and IPIA, it’s also rare for the opposing team to win.

If you’d like to watch the debate and listen to the excellent contributions from BPMA members including BPMA President, Graeme Smith, please view the debate here.